* Fixed chat spam of gang territory earnings, as shown in https://sf-se.net/forum/threads/gang-territory-bug.588/
* Fixed antifall sometimes returning players to their bike when teleporting somewhere.
* Added 'details' option to the gang territory menu to inform gang members of the approximate earnings and how long they have held the territory.
* Gang turfs are no longer captured by outnumbering attackers to defenders but rather by the total amount of kills earned.

* In the event of a tie at the end of a turf war, a gang zone under dispute will be given up by the defending gang and locked for an hour to prevent abuse.
* /spos and /lpos can no longer be used once a player joins a turf war.
* Add two NEW derby maps by @NoType, entitled Palace and Egypt.
* Add NEW parkour map by @NoType. This is also quite challenging! Experience it now at /parkour1.

* Player vehicles are no longer repaired if they are in a turf war.
* Back-end improvements to the gang turf wars.
* Add ANOTHER NEW parkour map by @NoType. It is not only beautiful, but challenging! See below: 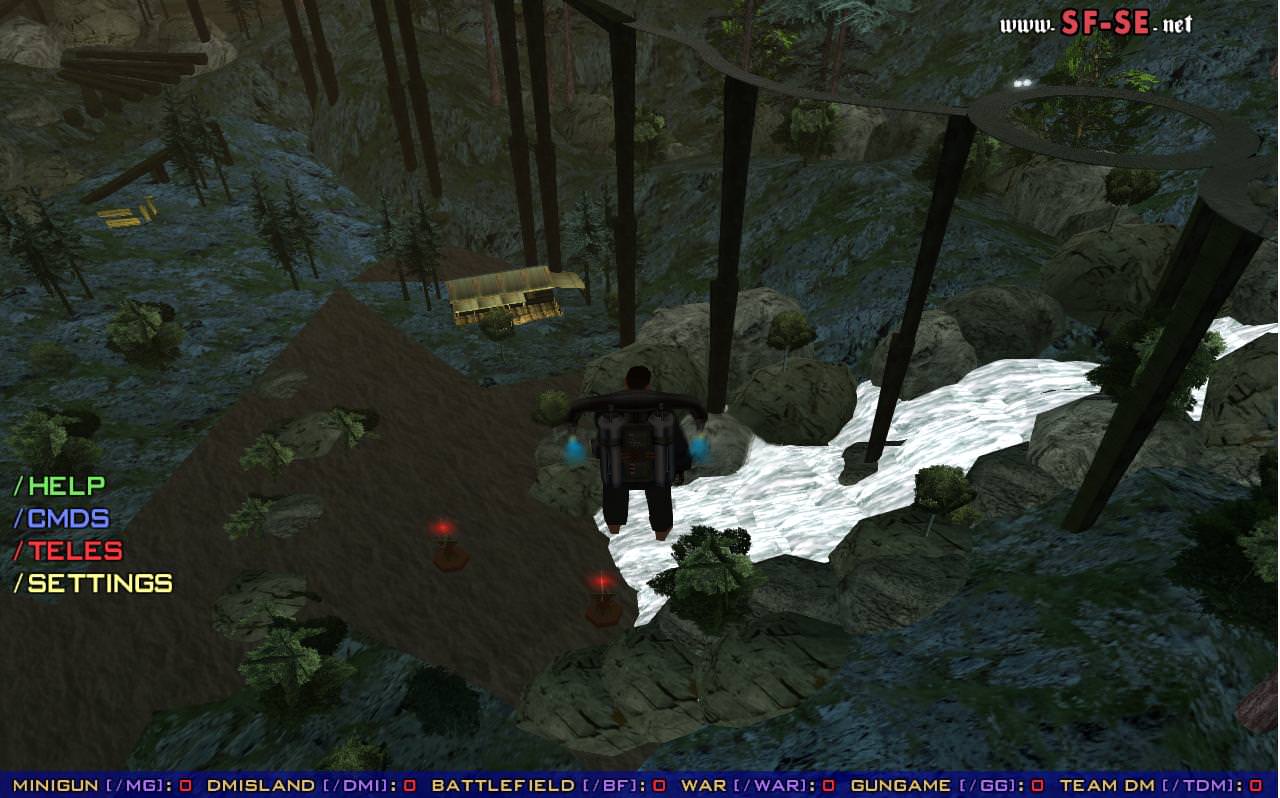 * Fixed inability to go to the previous page in the /racerecords dialog.
* Vehicles can no longer be spawned in turf wars, and should one be brought with one while joining, it will be destroyed. However, safe vehicles such as those available at teleports are permitted to travel there. Many thanks goes to @Silent for documenting abuses as well!
* Players can no longer use /goto if they are in turf wars.
* Redesigned the bottom bar textdraw. It looks cleaner and more modern now!

* Improved the way race submissions are displayed. One will now be able to see the author's name and the date the submission was made.
* Prevented possibility of capturing gang turfs if one is in a different minigame but in the same location as one.

* Fixed /exit not working for gang turfs.
* Fixed ability to use /fix in a turf war.
* Fixed errors in parsing race names in the /racebuild dialog.
* Eliminated possibility of killing a fellow gang member in a turf war and capturing a turf. Reported by @Akira.
* Removed nonworking radio stations and replaced them with working ones!

* New vehicle export minigame. Every so often, a vehicle will be selected for export and it will be announced and visible with an icon on one's minimap. If one enters it, they will see an destination location on their minimap indicated by a checkpoint. The first player to deliver the vehicle to its destination receives a prize!
* New achievements:
Sharp shooter: win 3 shooter rounds in a row.
Interior decorator: Buy house furniture.
Gun guru: Unlock all weapons in gungame.
* New /sniper location. The previous location was afflicted by a game bug (out of our control).
* Leaderboards! See the best players using /top.
* New DMIsland arena by @NoType.
* Implement map voting for deathmatch island. This occurs every 30 minutes and participants will be shown a dialog and asked to vote. If there are no votes, a map is randomly selected.
* Quick entering and quick exiting are now enabled by default.
* Removed restrictions on /ignore and /unignore. All users are free to access them.
* Added /ws as a shortcut to /weaponset.
* /teles -> Deathmatches now redirects to /dm.
* Fixed players sometimes receiving 6 rockets instead of 3 in the /war minigame.
* Fixed minor quirks about the achievements textdraw.
* Fixed gangs not properly receiving goldstars after turf war activities.
* Fixed nondrivers being able to use /tune and /vehiclemod.
* Probably fixed rare gang issue discovered in https://sf-se.net/forum/threads/gang-bug.709/.

* Godmode can no longer be enabled immediately after being damaged to prevent abuse. Suggested by @BlazaLot420.
Last edited: Mar 12, 2018

* Fixed player being situated slightly under the ground when teleporting to a race checkpoint they made while in an NRG-500.
* Fixed the business delivery minigame not restoring one's object streaming preference after leaving.
* Fixed a serious issue discovered by @Vertex.
* Previously VIP (or regulars with enough online time) features jetpack and vehicle addons (/neon, /siren, /headlights) are now accessible to everyone.

Much of the work now is focused on a cops and robbers minigame. Feedback is welcome!
Last edited: Mar 22, 2018

Cops and robbers is a minigame in which robbers commit crimes (typically robbing) and cops are responsible for
bringing them to justice. It is set in San Fierro where many businesses are located. Cops have a base in the SF Police Department
building and robbers have a base in Chinatown.

Cops should seek to /arrest (or key Y) criminals they encounter. Once a criminal is arrested, the arresting officer will need to
transport the criminal to the police station for them to serve jail time (directions shown in-game). The most wanted robbers can
be seen through /wanted.

Robbers should seek to find businesses to rob by exploring the area. Once inside of a business, robbers may /rob the business for cash.
Police will be notified of this and will likely pursue. If a robber is arrested and brought to jail, they will need to serve time for their crimes.
However, imprisoned robbers may /escape, or /bribe the officer who arrested them, or receive a /bail from a fellow team-mate.

Weapons can be purchased at the local Ammunation or through a weapons dealer indicated on your map. Weapons may also be acquired
from killing (players will drop the weapons they're holding when killed).

Vehicles are spread plentifully around San Fierro but they can otherwise be purchased at Otto's or Wang's.

The hospital is available to treat injuries at any time for a cost.

* Smarter safe zones. Spawn killing is still entirely protected against, and weapons are allowed in them (or anywhere) if godmode is disabled.
* Weapon sets (/weaponset) can now be modified on the fly in permitting deathmatches (e.g, Battlefield, DMIsland, War).
* Gang ranks can now contain spaces. Example: 'Senior Advisor'
* New two duel arenas (a warehouse, and the LVPD) to accommodate duelers with lower FPS.
* Spectators will now be returned to the location at which they started spectating when finished (/specoff).
* Improved the derby vehicle lineup - fewer slow vehicles and more fast ones.

Map updates (thanks to @NoType)

* Antifall no longer functions in Cops and Robbers.
* Reverted changes made to spawning in the previous update.
* The tip textdraw can now be hidden from /tdsettings.
* Fixed another bug related to gang member removal. Reported by Messi.
* Fixed possibility of gang member rank data being corrupted.
* /seepms now saves one's preference across sessions.
Last edited: Apr 8, 2018

* Duels now support rounds. Number of rounds is by default 1, but can be set to 1-10 from the /duel setup menu.
* Improved anti-spam detection measures. Referral: https://sf-se.net/forum/threads/new-spam-system.860/
* Improved gang name validity checking. Awkward characters such as '^', '&', '~' are no longer allowed.
* Renewed the /deagle map. It is likely that /deagle will have map rotation in the future.
* Added /ans as a synonym to /answer.
* Added /rb as a synonym to /racebuild.
* Removed /lsrace.
* Adjusted robber bail costs (was too cheap before).
* Fixed robbers being able to /bail themselves out of jail.
* Fixed animations gradually moving players backwards. Reported by @BlazaLot420 https://sf-se.net/forum/threads/bug-report-suggestion-list.731/
* Fixed bug where being killed while robbing a store could prevent future robbing. Thanks to @Zulo for reporting.
* Fixed team related bug where two gang members couldn't damage eachother after a turf war. Reported by @Polarbear .
* Fixed bug where spectators of duel participants did not have their interior properly set.
* Fixed /me not being included in anti-spam checking.
* Fixed /stopanim not working in the case of some animations (/wank, for example). Reported by @Polarbear .
* Fixed players being able to 'evade' team selection textdraws and through this, leading to problems.
* Fixed non-player spawned vehicles not assuming users saved color preference as it did in the PAWN gamemode. Reported by @Polarbear .

* Added a /lag command, eloquently written by @Polarbear, which provides helpful tips for reducing game-play lag.
* Added the Battlefield arena to the duel arena lineup.
* Fixed /SD not being playable. Reported by @wax in https://sf-se.net/forum/threads/sd.895/.
* Fixed possibility of players opening duplicate model selections and having one stuck on the screen. For example, by using /skin twice.

* Fixed a race exploit which allowed for better race times.

I'd like to remind everyone that reporting of problems/bugs is encouraged so that they are fixed in a timely manner. It was brought to my attention that this exploit in question was abused by many knowingly. This is disappointing. Finally, I'd like to thank @Nightmare for working with me to correct this issue.

* Several years ago, there was an announcement of Infernus Paradise 3, but it never made its way to release. IT'S FINALLY HERE! @NoType has spent many hours perfecting this map, we hope you enjoy (and are up for a challenge)! Click here for a preview.
* Courier job/minigame: This is a solo minigame inspired by the courier side mission in San Andreas. Use /courier to select
a client for whom to deliver goods. Then, once one enters the marked vehicle, the mission will start. There are four levels and
a time limit. The locations order is randomized each time the mission is played, making this potentially challenging. The objective is to deliver all goods to their destination in time. Feedback for improvement/new locations is welcome.
* Added SEVEN new themes to /maze. They will change after every round along with the maze route.
* New achievements:
Punctual courier: Complete a courier mission.
Exporter: Export 100 vehicles.
Veteran player: Spend 1000 hours online.
Hitman: Kill 2,500 opponents.
Executioner: Kill 10,000 opponents.
* Prevented deathmatchers with full health collecting DM health pickups.
* Racebuilding option 'load existing submissions' now shows submissions from newer to older. Requested by Vertex.
* Players now respawn in the gang zone if they are participating in a turf war. Should promote more deathmatching!
* Jetpacks are no longer permitted in gang zone wars. Suggested by Akira in https://sf-se.net/forum/threads/no-more-jetpacks-in-gangwars.625/
* Fixed the 'player is in safe zone' and 'player has /godmode enabled' game text message behaving incorrectly sometimes.
* Fixed chance of spectators not having their object streaming preference restored after spectating.
* Fixed players needing 50hrs of onlinetime to spawn a taxi.
* Possibly fixed the 'shooter boost bug' which sometimes occurred for people. Please let me know.
* Possibly fixed IRC bots not returning to the staff channel after an IRC server netsplit.
* Removed some excessive vehicles at various teleports.
* Optimized gang member data retrieval, more caching and better load times
Last edited: May 10, 2018

* Fixed some quirks with the /racebuild dialog and the previewing bug.
* Possibly fixed bug where Cops in Cops and Robbers could arrest dead players.
* Fixed bug where objects weren't re-streamed after failing a courier mission.
* Attempted to improve server entity streaming quality.