Can you hunt a goldpot under 1 second?

Server Staff
VIP
Hello SF-Se community! Today I'll teach you one bug in the game I found: a way to hunt a goldpot under 1 second. Impossible?
I think my signature can say anything, and I have a lot of screenshots like this in my computer.

Let's explain what happens:
If you didn't know, you have 10 minutes to find a goldpot, after that it disappear and a new one spawns randomly.
I found out that there is a tiny window of time between the last one disappear and the next respawns where both of them are spawned at the same time and this is the time you want to hunt the existing goldpot. This will work best on goldpots spawns on the ground.

How do we do it?
Go /goldpot and find it
Stand near the goldpot wait until 9:50
Spam the command /goldpot until the time reaches 9:59
Drive towards it as late as you can
The gap between the time a new one respawns and the last disappear is around 0.500 seconds
If you hunt the existing one within this time gap, the game will think you hunted the new one
Congratulations! You hunted a goldpot under 1 sec!

I challenge you guys to do it also, and post your successes in this post! Good luck

(There is a video of me doing it, in case I was misunderstood)

the master right there

Server Staff
That is a really a great find Almeg, however I believe normal players cannot spam /goldpot since their commands can get blocked.

Silent said:
That is a really a great find Almeg, however I believe normal players cannot spam /goldpot since their commands can get blocked.
Click to expand...

Might be. I still want to challenge players, let's see who can do this
S

Or hunt a goldpot in less than 1 second the ol' fashioned way:
Wait at a goldpot location, or just be there by accident, while a goldpot spawns. I have several such screenshots, but most of them are in old computers, so I won't go searching for them.
The one I posted in SF-SE screenshots (click here or see below) came from me placing my /l next to Movie Star Tour and it just happened to be the next goldpot.

Sulps said:
Wait until you see these! 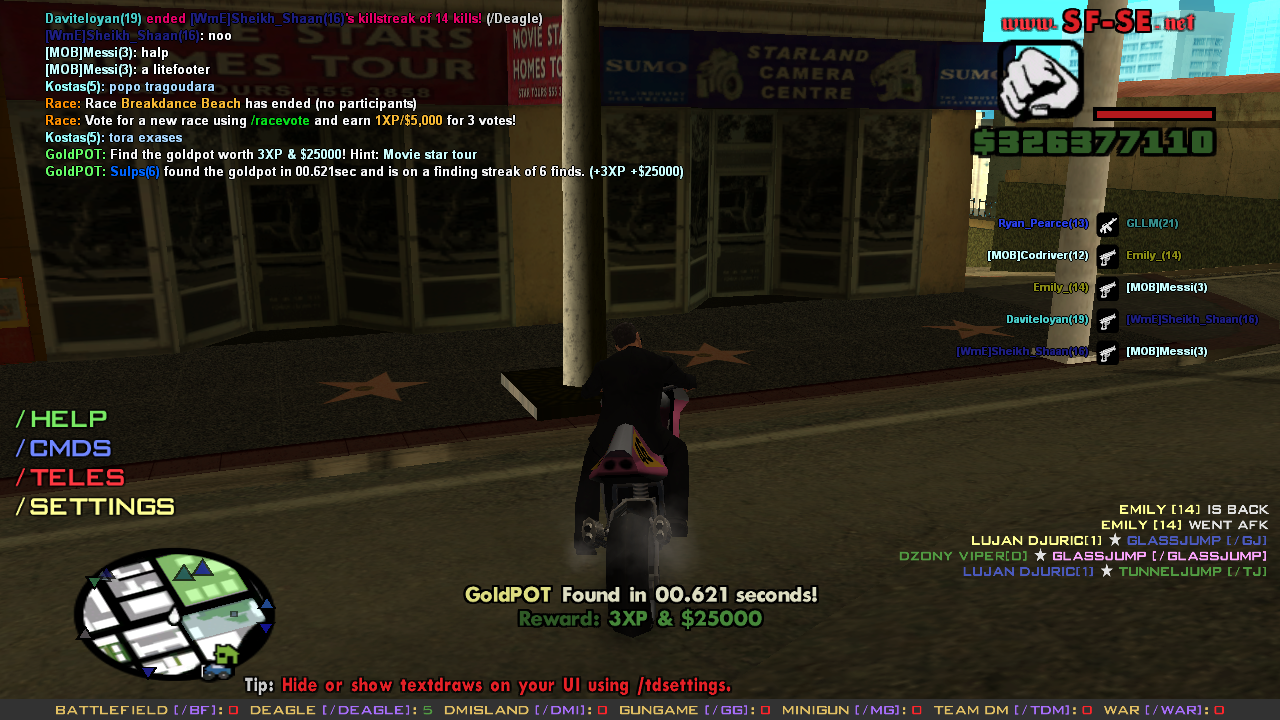 Silent said:
I believe normal players cannot spam /goldpot since their commands can get blocked.
Click to expand...

Commands get blocked when a player types 2 commands less than 0.2 seconds or so apart. Spamming the same command at 1 second intervals won't block anything. So this shouldn't be a problem.
S

I guess I'm the first one to respond to Almeg's challenge. I got not one, but TWO screenshots: 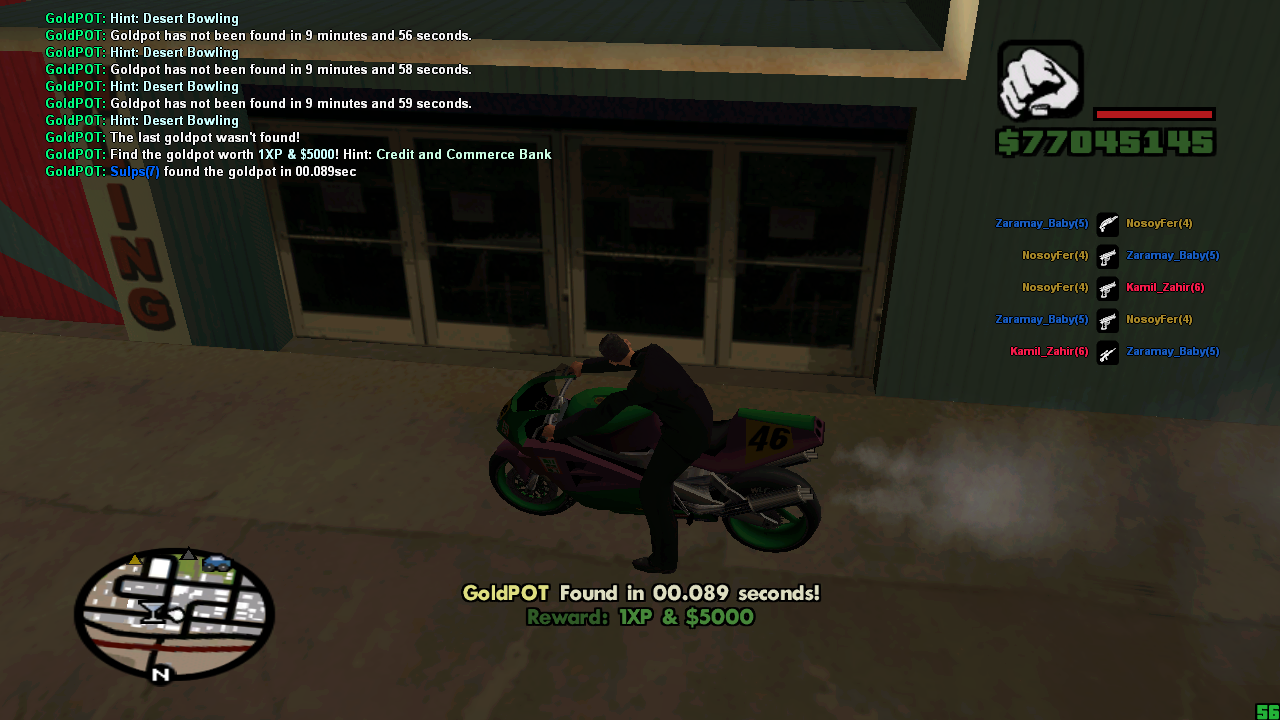 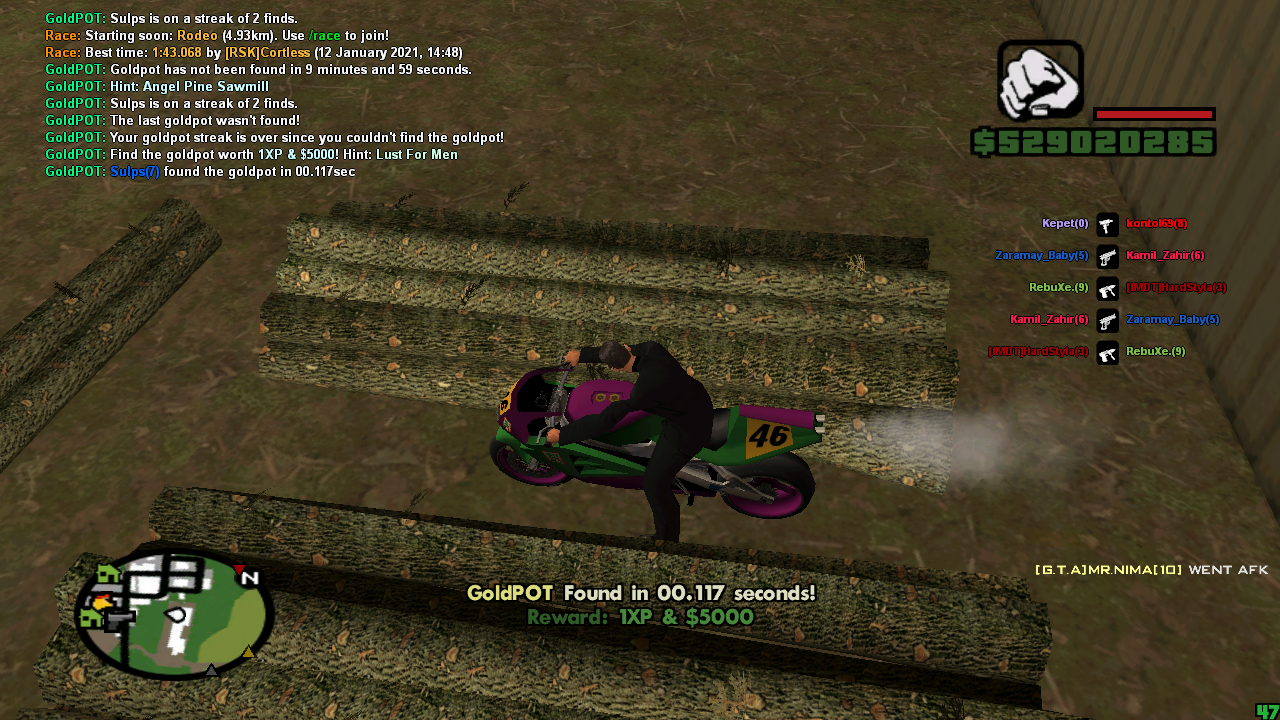